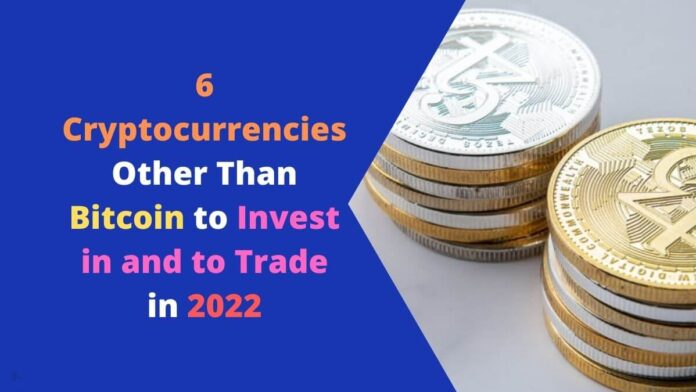 Thinking about investing in cryptocurrency? In 2021, the global crypto ownership rates were at an average of 3.9%, with more than 300 million cryptocurrency users around the world and over 18,000 businesses accepting crypto payments.

The cryptocurrency field has expanded since Bitcoin was launched more than a decade ago. From Ethereum and Solana to Tron and Cardano, there are many different cryptocurrencies, which can make things a bit overwhelming when you are first starting out.

To get you started, here are the top 6 cryptocurrencies to consider trading in 2022.

Ethereum is a platform powered by blockchain technology that is best known for its native cryptocurrency but also offers global payments and applications. In terms of market capitalization, Ethereum is the second most valuable cryptocurrency behind Bitcoin. At the end of 2020, the platform transitioned its consensus algorithm from PoW to PoS in order to reduce energy consumption and improve transaction speed.

Like Ethereum, Cardano works to enable decentralized applications and smart contracts which are powered by its native coin ADA. Another similarity to Ethereum is that Cardano embraces the PoS validation method that expedites transaction time and reduces environmental impact.

TRON is basically a blockchain-based decentralized digital platform that has its own cryptocurrency, Tronix (TRX). The platform mainly hosts entertainment applications and facilitates sharing of digital content. Developed in 2017, Tron grew fast, reaching 50 million users by 2021.

The Tron coin is a good investment that can be expected to grow in both the short term and long term after it recently suffered a crash that sent it plunging. Digital Coin Price, for example, predicts a bright future for this cryptocurrency, saying it will rise as high as 11 cents in 2023.

Launched in 2011 under the MIT/X11 license, Litecoin is an open-source software project and a P2P cryptocurrency. Litecoin was an early Bitcoin spinoff and, in technical details, it’s almost identical to Bitcoin, which is why it is often called “silver to Bitcoin’s gold.” However, unlike Bitcoin, Litecoin has a faster block generation rate and, as a result, offers a faster transaction confirmation time.

Litecoin’s lifetime high was in May 2021 when it was worth $413.47. As of March this year, it has a per token value of about $106 and a market capitalization of $7.4 billion, which makes it the 21st-largest cryptocurrency on a global level.

Polkadot is a cryptocurrency and blockchain platform that provides interoperability and interconnectivity between blockchains by enabling independent chains to perform secure transactions and exchange messages with each other without a third-party intermediary. Launched in 2016, Polkadot garnered attention from an entire community of developers, users, and investors, and is considered one of the most innovative projects in the cryptocurrency space.

See also  What Are DeFi Flash Loans and Controversial Features?

Solana is a decentralized blockchain platform with smart contract functionality built to enable scalable, user-friendly apps. Its native cryptocurrency is SOL. Solana runs on a unique hybrid proof-of-history and proof-of-stake and mechanisms that help process transactions securely. It claims to offer lower costs and faster transaction times than its main competitor Ethereum.

Blockchain-based cryptocurrencies are decentralized platforms that allow you to enter contracts or engage in P2P transactions without the need for third-party intermediaries such as banks or monetary authorities. However, despite the large number of cryptocurrencies on the market, Bitcoin remains the dominant player with a worth of about $44,000 as of February 2022 and a market capitalization of over $830 billion.

Thanks For Visiting this website any doubt you can comment below, you want to latest updates this type of useful information just follow on  Google News.

AktienPros Review – The Most Reliable Broker for Investors [Updated]

Owning a Cryptocurrency – Procedures and Benefits

Reasons why the cryptocurrency is so popular

Money Subsidiary is one of the top Personal Finance Blog where you can learn more about credit cards/debit cards and their proper utilizations in any financial platform. Here also you get more knowledge regarding Banks and you comes to know about how to use net banking and also steps for online logging related to credit cards and debit card as well as their proper and safe guidelines to enroll credit card online. NOTE:- We declare by this that we are not officially associated with the information's mention here. This is only a blog to help users guideline information and its information can be used for an education purposes and hence we are not responsible for your insecurity arise when you deal with any financial platforms and only specified company is committed to solving any kind of problems or trouble that has been arise or faced by the customers.
Contact us: msubsidiary@gmail.com
© Money Subsidiary Copyright 2022
Go to mobile version